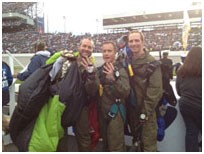 The No Limits Skydiving Demo team successfully completed another Sprint NASCAR demo jump at Richmond International Raceway for the spring Sprint Series race. The weather wasn’t as good as the prior day’s jump. The forecast called for rain and clouds 2500-5000. Fortunately, the rain held off and the clouds stayed out of the way. Right on time, the three skydivers jumped from a Cessna 182 from 3200 feet over top of turn four. For this skydive one jumper brought in the American flag which give the other two skydivers the opportunity to fly over the track and put on a great show for the 50,000 race fans in the stands. After landing, the team walked past the cars where the drivers were getting into their cars. After posing for photos and shaking hands with well-wishers, the jumpers turned into big NASCAR fans and watched the race. The next time you are at the race and see some people getting to their seats late, it might just be the skydiving demonstration team.

Skydiving into Dover Raceway and the Preakness