Skydivers – Most people say we’re crazy. Some say we have a death wish. Psychologists say people with an inclination to take high risks are a necessary part of the continuation of our species.

We are people from all walks of life: students, blue-collar workers, engineers, doctors, nurses, you name it. What we have in common is an affinity for a high-risk sport, skydiving. Some also participate in other sports like scuba diving, kayaking, rock climbing, or skiing. There is a sense of camaraderie among us, a sense that we understand a greater truth that is missed by most people.

Mentally, it is an incredibly refreshing break from “society”. Skydiving is a super stress reliever. When you are skydiving, you focus on that skydive and nothing else. This keeps away all the distractions of life. No room for stray thoughts or worries here. The intense focus and the pump of adrenaline leave you feeling mentally and physically cleansed. 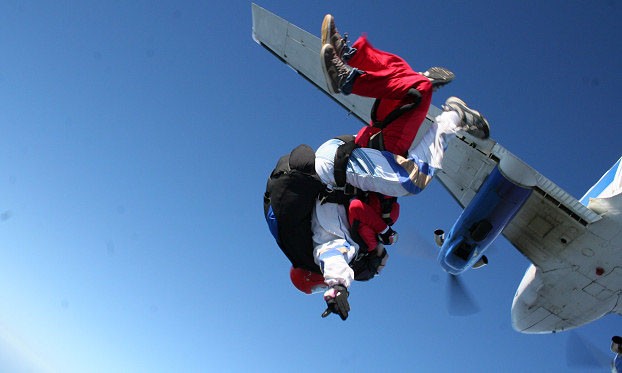 And yes, the adrenaline is no doubt a part of it. Your body responds to the rush of adrenaline, bringing with it a sense of excitement and a surge of energy. Our human bodies are made to produce adrenaline as a survival mechanism, and it is being regarded more and more as a necessary part of the human experience and overall health. Something any skydiver could have already told you a long time ago.

Stepping out the door of a flying airplane has other benefits too. It makes you mentally tough. It takes a lot of mind control to go against what you have been taught about danger since you were a child, get hold of your thoughts, and realize that yes, it is okay to step out that door. You acquire an increased awareness of all that is around you. You develop a confidence in yourself and a quick response as events happen around you. The sense of accomplishment is incredible. Knowing you met your fear, took control, and pushed yourself to take that step flows over into other parts of your life.

When I did my first skydive, a group of us from work went. I organized the outing. Everyone had a blast but I was the only person who did more than one jump. Later, in talking with one of the guys in the group, he said to me – I know that whatever I face in life, I can remember that I went up in that plane and did a skydive. If I can summon the courage to do that, I can do anything. It was great.

Okay, so enough of the psychobabble mumbo jumbo. What is the sensation? When you step out the door of a flying airplane you are in freefall until the parachute is deployed. Most skydives are done from around 10,000 ft. to 14,000 ft., providing the skydiver anywhere from 30 seconds to 70 seconds of freefall time. Stick your arm out the window of a car doing 60 mph then imagine your whole body out there going twice as fast – then you start to get a little of the idea of what skydiving feels like.

No one I’ve ever talked to has been able to put into words the sensation of skydiving. Even asking first time jumpers – is there any way to describe what you just did – only elicits a wide-eyed, grinning, no way.

Freefall is such a stupendous sense of freedom. You are flying through the air, able to move your body in 3D. You can fly forward, back-up, move sideways, speed up how fast you are falling and slow down how fast you are falling. Yes, you are continually falling. But during that time you are definitely flying your body. You can do flips and twists. You can stand on your feet or stand on your head. There are absolutely no limits as to which direction you can move your body.

And let there be no doubt – there is not a plane around that can give you the same view. What an awesome sight to view 360 degrees around you – the sky, the horizon, the incredible beauty of the world, right there for you to see with no obstructions. To feel you are a part of that sky.

The parachute flies like a glider, responding to the pilot’s input and slicing you through the sky. It can be flown slowly and smoothly or fast and wild. But either way, with correct pilot input, it will bring you safely and softly to a landing on the earth.

Why do we skydive? Who will ever understand the beauty, the freedom, the rush but someone who has been there? Truly, the sky is our playground.

Lori Steffen is an experienced skydiver who has won two medals in USA national skydiving championships, both in freestyle skydiving.

What is The Minimum Age For Skydiving?